Spring awakening in the vineyard

Off to the vineyard

Finally we are there. After the vines having spent a few months in peace and quiet during winter, the first warm days bring them back to life. The vines’ sap returns into the one year old wood which is now ready to receive its pruning for the year. Typically, the pruning is done between January and end of March. We decided to go for a late pruning this year, a decision which is influenced by our fondness for warmer days. When reaching the vineyard, we are welcome by the first spring flowers and the stunning mountains surrounding our vineyard. This is a real treat after the grey and cold winter months. 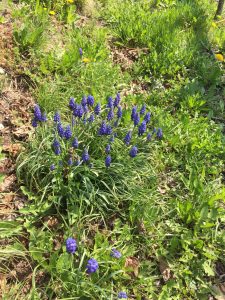 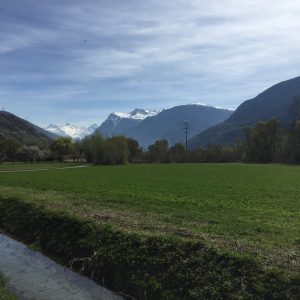 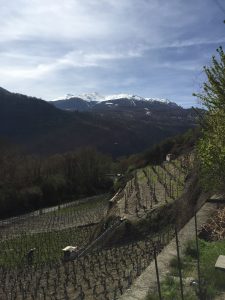 Enough now, off we go to work!

Pruning of the vines

After having been partially cut (top third of the branches removed in December) and the actual pruning late March (for once not done by us but by the experts of Diroso Wineries), the vines still look rather naked. Last year’s wood is still caught in the wire frame and needs to be removed. After having done so, the branches need to be carefully bent and attached to the lowest wire. 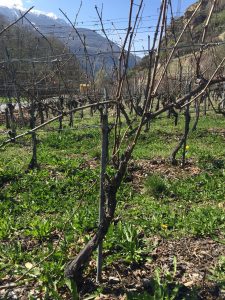 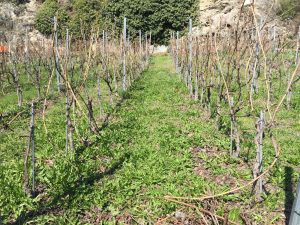 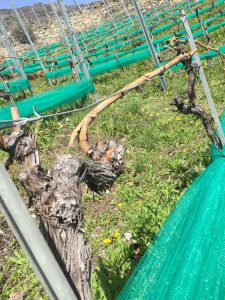 The buds of these meager branches will burst in a few days resulting in new branches which will reward us with sweet fruits in 6-7 months. We will periodically document the vines’ development here on OlloWorld. The principal performers are: 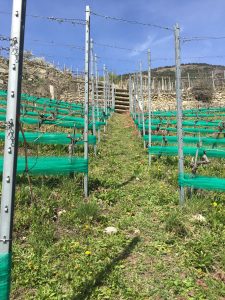 St. Laurent (also Pinot St. Laurent, belongs to the burgundy family) in a vineyard of approx. 350m2 in the valley of Rhone near Visp, located at a sunny slope

PIWI varieties Prior und CAL-122 (fungus resistant varieties) in a vineyard of approx. 350m2 in the valley of Rhone near Visp, located close to the river Rhone. PIWI varieties are resistant to diseases such as mildew and therefore only need to be sprayed with chemical agents as an exception. The wines produced from these varieties therefore reach the consumer in an even purer state than biological wines. Diroso Wineries’ webpage provides interesting insights to the difference between PIWI and biological viticulture.

Speaking of biological: The OlloWorld team had the pleasure of tasting Tom Litwan’s biodynamic wines combined with a 5-course vegetarian menu at Gustav’s in Zurich a few days ago. Our favorites were the enchanting sparkling wine “Litwan” (a rosé wine from Pinot Noir grapes) and the fruity and crisp Riesling-Sylvaner “Schinznach Ragnisbuehl 2015” served with the first starter. When tasting the two Pinot Noir “Chalofe 2008 and 2014” served with the main course, we needed to be very patient in order  to discover their potential and complexity. Please visit Chef’s Handyman for the full report on the food served that evening.